J got a new kitten (Rosie – a gray tabby) for her birthday last month. Before you die of utter sadness at the loss of our beloved Kali-cat, DON’T. She hasn’t been replaced. She’s still with us – in all her declawed gorgeousness! Rosie, on the other hand, is a 4 month old cat with more claws that friggen Moofasa. Seriously. That cat can rip you to shreds in 2 seconds flat. Sis is the one who bought the little she-devil. And she proooooomised that Rosie was nothin’ but a little lovey – all purrs and rubs and cute meows. And she WAS. At first. It lasted a total of 48 hours. Then, the little, cute puuuuuurfect kitty turned into hell cat. Sometimes she’s a sweetie pie…other times, she’s terrorizing Kali…clawing that beeeyotch up! She spies….she creeps…she POUNCES on the poor, unsuspecting DECLAWED Kali. At first, Kali would fight back, thinking, “I’m bigger than this little shrimp…I’ll show HER who’s boss!” But it didn’t take long for Rosie to realize that Kali was defenseless against her sharp, wolverine claws! They bounce around the house, jump on the furniture…Rosie on Kali’s damn tail the whole time. There’s nowhere to hide! Poor Kali. We’ve since resorted to squirting Rosie with water when she won’t listen. Cats + Water = Peace and Quiet.

We can’t get her declawed until she’s at least 6 months old. That’ll be Kali’s pay-back time! Uh huh! The little scrawny cat shall pay!

Oh, but get this…when we’re not home, the two sworn enemies roll up together in a little furry ball and sleep. Go figure. And, David’s figured out a way to calm Rosie down. First he holds her up high around her middle, legs dangling, and he sings “It’s the ciiiircle of liiiiife…and it moves us all…” While J and I laugh hysterically. Then, he squeezes her to his chest until her eyes pop out of her head and she meows and moans and prays for her life. I’m like, “Hubber, she’s going to tear your ass up with her claws!” But he’s all brave and muscular and manly taming the 2-pound-beast. We’re so proud. After a few minutes in the death grip, watching her super short life flash before her glazed eyes, Rosie is her cute, lovey little self. At least until she sees Kali…that’s when the tiger instincts kick back in and no living creature is safe! 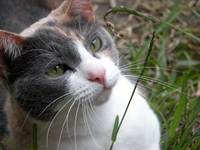 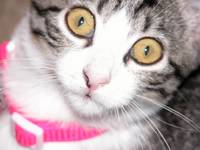 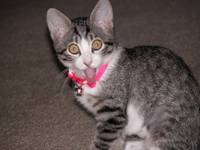 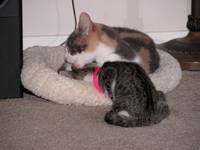