My daughters, however, are beginning to overshadow my favorite season with their own birthday celebrations. WTF? Who do these little heifers think they are?? No one's birthday is more special than mine!

Take lil J for example. She's only three years old and she's already in love with her own birthday...she sings "happy birthday" to herself at least once a week...all...year...long. I'm pretty sure it was the second song she learned to sing (after Twinkle Twinkle Little Star). And if I come home from shopping, she asks, "what did you buy me??" and although I remind her that it's not her damn birthday, she doesn't care. She thinks every day is her birthday and that any time I go to the store, I should come home with a gift for her. And, she asks me to make her a vanilla cake with strawberries in it randomly, months after her birthday!

Then there's J. She's 13 and she's a little more sneaky about stretching her birthday out by weeks. The weekend before her birthday, we had to go to a family dinner thing. The weekend after her birthday, we had to endure a slumber party (10 screaming, giggly girls). That's two cakes, people. TWO. And she's nowhere near MY age! But that isn't the end of it...two weeks after her birthday, I get to drag her and 3 of her closest, dearest friends (that she happens to not be hating at the moment) on a trip to the Kemah Boardwalk. I draw the line after that. This shit is getting totally out of hand.

I'm beginning to think I might be a bad influence on my children.
at September 16, 2009

Email ThisBlogThis!Share to TwitterShare to FacebookShare to Pinterest
Seriously, Y'all, How Friggen Cute Is My Dog?! 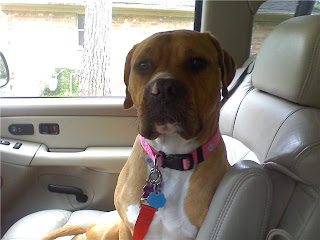 Look at that face! Don't you just want to grab her up and squeeze her?

Email ThisBlogThis!Share to TwitterShare to FacebookShare to Pinterest
Houstonians Are Assholes When It Rains

Most people around here pray to the 8 lb, 6 oz baby jesus for rain - they're sick of all the yard watering and low rivers and shit like that. Me? I could give a rat's hairy ass if it rains or not. I'll tell you why. First of all, I love the rain. Just about as much as I love doggies! I love it when I'm comfy, cozy, snuggled up under a stack of blankets, indoors watching tv, fireplace going, A/C turned down to freezing....or I love it when I can be carefree, outside, letting the rain slide down my bare skin. That's nice. But, that is not my point. My point is this: people that live in Houston drive like idiots in the rain. IDIOTS. It's like some of them are a bunch of desert people who have never seen precipitation fall from the sky and land on their cars and on the road...they go 20 miles an hour in a 60 and ride the breaks, their noses plastered to the windshield. There are others who like to scare the desert people into shit fits so they swerve around them and gun it, making them go even slower. Then, there are my favorite jackasses. You know, the ones in the huuuge trucks? The ones that like to jet through rising waters, causing those around them to stall from flooding? The ones who like to jump on and off the freeway via the grassy knolls instead of the exits intended for such nonsense?

And you know when the worst possible time is for rain? Rush hour. Which in Houston lasts from 6:00 - 9:00 a.m. and again from 3:00 to 7:00 p.m. Rush HOURS. Monday through Friday. No exceptions. Unless an accident occurs, of course. Accidents have been known to increase these time frames up to an hour or more. If that sweet baby jesus really loved us, he'd save the rain for the middle of the night. Which could also work for me in that it's easier to stand out in my backyard in the rain in my birthday suit when everyone else is asleep. 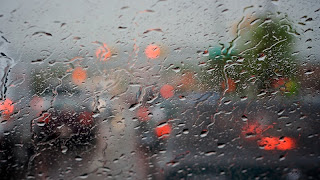