Being Merry and Gay - It's Not Just For People With Holiday Spirit! 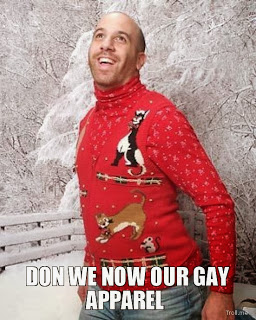 I try my best to avoid uncomfortable conversations with my kids.  I used to have a knack for changing the subject -- like pointing and shouting "LOOK, there's a monkey wearing pink pajamas over there!"  But, here lately, my brain doesn't seem to churn as quickly as it used to.

Tiny Spawn: It depends on how it's used.  If you heard it in a Christmas song, it probably means "happy" or "joyful".

<Hubber makes a bee-line to the bathroom>

Me: Well, it's NOT a bad word.  And, I think all of y'all are confused and don't know what the heck y'all are talking about!

Tiny Spawn: Oh!  Well, I guess I'm not gay then, because I'm gonna marry a RICH MAN when I grown up!

Me: Right on, sista.

This kid makes me so proud.  Just when I think a conversation with her is going to hell and that the dreaded "sex talk" is eminent, she pulls some really smart shit outta her hat and impresses me.  She's gonna "marry a rich man"??  That's enough to bring a tear to any momma's eye. 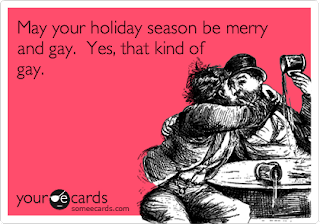 Email ThisBlogThis!Share to TwitterShare to FacebookShare to Pinterest
Labels: crazy shit my kids say, don we now our gay apparel, holiday spirit, merry and gay, what does gay mean

Pigs are really super cute... but they're also yummy! 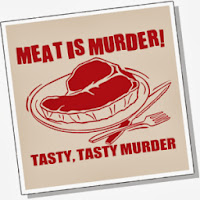 I've been a large gal most of my life.  And, y'all know at least once a year I go on my "this-is-it-I'ma-get-skinny-no-more-bullshitting" kicks where I go on diets (or stupid "lifestyle changes") and preach about how THIS time I'ma be SERIOUS about this shit.  Sure, I might lose weight... but then I quit because all that dieting shit is just too fucking hard to keep up with while maintaining a sane and happy disposition.

I think everyone prefers me sane and happy.

That being said, I've tried lots of different diets, y'all.  But never once have I gone on a diet that didn't allow me to eat meat.  Ever.  Why? Because, I'm a carnivore, people!  I need to feed my face with meat even if I know it might sit undigested in my belly for weeks.  I don't give a damn.  That's what they make detoxes and shit for.

Turns out, the apple doesn't fall far from the tree (duh).

This is the conversation that went down the other day as the littlest spawn was chowing down on some leftover Thanksgiving ham...

Spawn:  Momma... I forgot to tell you that the other day at school, we learned about how all the meat we eat used to be real live animals.

Spawn: When Cinna (that's actually some kid's name) found out that her burger used to be a cow she freaked out and said she was going to become a vegetarian.

Spawn: Yeah!  Pigs are really super cute, but they're also yummy.  I just have to eat 'em all up!

I mean, seriously, y'all... it's the circle of life.  Didn't grass have to die to feed the cows?  Didn't truffles have to die to feed the pigs?  You think that shit doesn't have feelings just because it has no face.  I can tell you right now that plants have feelings.  I know this because plants hate my sister.  Anytime a plant is anywhere near her, it keels over and dies so it doesn't have to breathe the same air she breathes.  If THAT ain't proof of plant feelings, I don't know what is!
at December 09, 2013