In any case, my point here is that either my mother-in-law didn't pound these warnings into my Hubber's rather hard head when he was growing up, or he's lost a few of those important memory brain cell thingys over the years... because look what I discovered the other day: 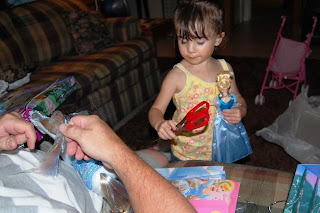 Yes, that's right... our just-barely-two-year-old daughter almost stabbed herself with scissors on her birthday! Why? Because her Daddy, let her play with them while he helped her open her gifts. Notice she's holding the pointed, very sharp end of the scissors TOWARDS her fragile little body. Also, notice the false sense of security on her face. She thinks she's a big kid who can hold scissors near her heart without the chance of it ending up in a red, bloody mess on the floor. This kid has a lot to learn. As does her father.
at June 28, 2008

Today, I worked from home. It's one of new "alternative/flexible work schedule" options now offered by my employer (thanks to me, of course, for pushing the matter). It was heavenly. Aside from the fact that I spent most of the day with a brown nose as I begged (in the most professional manner) for sponsorship dollars, it was nice not to have to get up at 5:00 a.m., debate about what to wear, apply make-up, blow dry hair, feed lil J, rush to drop her off at day care by 6:50, then sit in traffic for over an hour....just to end up sitting behind my computer and on the phone for 8 hours.... something I can certainly do from the comfort of my own home, with no regard to mascara and mousse and heels and TRAFFIC. Being at the office when there are no meetings or other obligations is entirely overrated. I vote we work from home at least 2 days a week! Think of all the gas money we'll save... and how the stress will just melt away... and the money we'll save on dry cleaning... and how we'll be close to our families. If only it would also make us skinny... now that would be perfection.
at June 16, 2008

Email ThisBlogThis!Share to TwitterShare to FacebookShare to Pinterest
Summer Lovin'

Well, Summer is officially here. Which means we are faced with a very tough decision. To vacation or not to vacation. That is the question. Ok, so Summer actually started two weeks ago, making us fashionably late on making a decision...but that's how we roll. Gone are the days when we planned trips and took a week to pack for said trips. These days, we fly by the seat of our pants. It took me exactly 1 hour and 23 minutes to pack for a 7-day road trip to Mt. Rushmore last March. Aren't you proud? I attribute this new found lack of planning to the fact that I'm getting old and lazy. Plus, it makes things more exciting! (And it keeps Hubber on his toes.)

So...first we decided to go to Destin. Then, no, we can't go to Destin, we must, must, must go to Disney World. Then, think again, given the price of gas these days, a road trip to Disney World would be way too expensive...looks like it's going to be Destin. Then, BAM. Turns out we can go to Disney for super cheap if we stay at some shady hotel, eat bread and drink water for 4 days and 4 nights. So, Disney it is! Not.

Last week, as Hubber was staring up at the big oak tree in the back yard, he decided that the 263 limbs that have been hanging over the roof of the house since time began MUST come down at once! No ifs ands or buts about it. It's hurricane season for crying out loud! So, the trip is off again. And our bank account is about to have a stroke. And my plans to buy new vacation shoes and handbags have vanished into thin air...all that's left are deep, empty holes in my heart where images of pretty little shoes and fabulous bags used to be.

We will be taking some vacation time, though. Where will we go, you ask? Well, right outside to our backyard. We'll save on gas... and packing... and unpacking... and listening to The Wiggles ad nauseum... and all the other hassles of taking two children on a road trip. I may not get to buy new shoes and handbags, but I'll certainly be stocking up on on Malibu Rum and Tequila Rose. Hey, a girl's got to get her kicks somehow!
at June 14, 2008

Email ThisBlogThis!Share to TwitterShare to FacebookShare to Pinterest
Beauty and the Beast

I'm not as beautiful as I was Pre-lil J and it isn't because I've gotten older and fatter and lazier, either. It's due to lack of beauty sleep. I don't think there is anyone I hate more than the parent who BRAGS about how their 6 month old baby sleeps through the night... as a matter of fact, this is usually a parent whose freak child even sleeps 10-12 hours without waking up once...not one time. Meanwhile, lil J has not slept more than 3 hours straight for the past TWO YEARS. Even when highly medicated (which she NEVER is unless she is very, VERY ill, of course), she refuses to sleep like a regular human being. She wakes up several times a night with requests for such things as a cup of juice, someone to help her put her blanket back on her, a diaper change, or a larger bed in which to sleep in - one which already contains two not-so-small people. Her new favorite request is to go sleep on the couch. Which makes me wonder if maybe she's some sort of alien being. Some sort of beast from another planet - sent here to make my life a LIVING HELL.

Let me break it down for ya. The following is a typical night in my Honeymoon Suite:

9:00 p.m.: lil J goes down for the night. She is placed, ever so gently into her crib, the covers are tucked up around her and the tag of the blanket is placed into her cute, little hand. A sippy cup is placed near the rail, within baby reach should she feel parched within the hour.

10:00 p.m.: Sippy cup is empty, lil J is stirring. Both Hubber and I are fumbling around as fast as we can to fill up the cup before she wakes up for good.

10:13 p.m.: The second cup is empty and I am worried that she's probably got a full diaper by now. I reach in...and sure enough, the diaper is about to explode.

10:30 p.m.: I finally fall asleep and begin dreaming of blue coconut slushies and baskets full of chili cheese french fries and money, and lots and lots of money...

3:00 a.m.: "MY CUUUUP.....MY CUUUUUP??!!" the beast screams in horror from her crib when she awakens and realizes her cup is not within baby's reach. Both Hubber and I wait, motionless in bed. Each hoping that the other will handle the panicky beast. Each praying that the next words that come out of the beast's mouth are the name of the other parent.

5:00 a.m.: TWENTY MINUTES from the time my alarm clock is set to go off, the beast is awake again! This time, she's wet and needs a diaper change. "Just a minute," I beg her....I MUST get my 20 minutes of sleep in before getting up for work. But, she's relentless. Her pleads for a diaper turn into screams for her cup again.

5:10 a.m.: I'm tired and I'm pissed. I change her diaper and put her back into her crib with a fresh cup of pedialyte/water. David is snoring.

I'm convinced that God is punishing me for all the bad things I ever did in my life....Hubber is just an innocent victim being dragged along in my punishment because he was crazy enough to marry me. That's what he gets.
at June 07, 2008

Email ThisBlogThis!Share to TwitterShare to FacebookShare to Pinterest
Remember Me?

It's hard to believe that two years of my life have passed since I last updated my blog. A lot has happened since then. Most importantly, we've subtracted two members of our family and replaced them with one, very colorful member. In short, lil J came and Kali and Rosie left (turns out the new kid was allergic to cats -- we should have realized then that our lives were about to get turned upside down). Yep, lil J in all her glorious toddler-ness has livened up things around here. Our home will never be the same again. I'll fill you in on lil J stories later, but suffice it to say, she is not yet 2 years old and she's already speaking in complete sentences, singing songs, counting from 1 to 10, and keeping us all on our toes (that's nice for "driving us nuts"). As for little, innocent J? Well, she's pre-teen now. We're going through terrible two's and teenage hormones all at the same time. 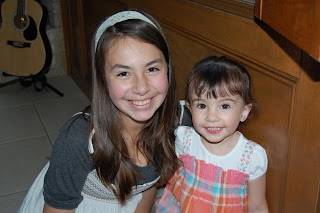 I probably don't have to tell you that Hubber's hair is really turning gray. Poor thing. Me? I've really learned how to get my drink on. I've replaced water in my diet with Malibu Rum and diet coke. It's lovely....especially when downed with Xanex. Just kidding, I don't take Xanex - Errrr, much. But, it's only a matter of time.
at June 05, 2008