I almost forgot to write a little about our 4th of July excursion! If you live in Houston, the place to be on Independence Day is downtown at the Elenor Tinsley park. There's a huge festival there - with live music, great food, and tons of freaky weirdos (Hang on to your kids!). Obviously, we stayed home most of the day. But, true to our family tradition, we ventured out into the world around 7:00 p.m. in search of a fun place to view fireworks. Here's how cute we looked: 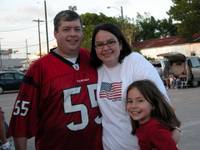 Our happy little family...waiting for the fireworks on the 4th of July!

...Unfortunately, people got wise to our secret spot (in the parking lot of the Houston Police Federal Credit Union) and closed it off. Where to go... Where to go?? Why, to pee-pee of course! It doesn't matter where we're going or how long we're gone, J ALWAYS has to go to the restroom when we're in the car. Unless she's watching a DVD, of course - in which case, her bladder goes into hibernation or something. Anyway, we found a restroom then continued our search for the perfect spot for watching fireworks. Finally, we found this place: 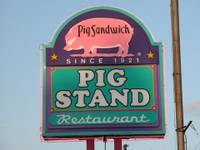 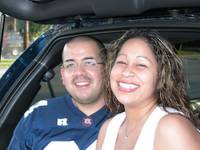 Sis and friend joined us at the Pig Stand for tailgating & fireworks! 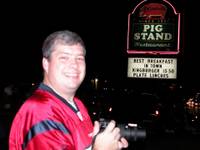 Don't worry - our view of the fireworks was NOT obstructed by this gorgeous sign!

Posted by Snarky Heifer at 2:48 PM No comments: Links to this post

What the heck do they put in the drinks at Starbucks? I’m beginning to wonder if there’s some underhanded, illegal activities going on there. I’m not a dope head and have no idea what it’s like to be addicted to crack – but if it’s anything like the addiction I have to the toffee nut latte, iced caramel machiato and the caramel frappuccino then those crack heads have a serious problem! And I know that it’s not just me this epidemic is affecting because J is hooked on those damn non-coffee frappuccinos! The vanilla bean frappuccino to be precise. The kid starts salivating every time we pass a Starbucks coffee house or when she gets a glimpse of one of their billboards. She’s like Homer Simpson, “mmmmmm, starbucks!” She turns into a zombie. Nothing can snap her out of it! She yearns for the sweet vanilla cream…she craves the fluffy whipped cream doused in… CRACK! When I tell her we’ll stop there on Friday, she counts down the days! “3 more days till starbucks!” This is not normal, I tell ya! I’ve even found myself hoarding dollars for the stuff (instead of using my debit card) so that hubber won’t know how often I go! But now, I think he’s on to me. I’m a crackuccino addict. 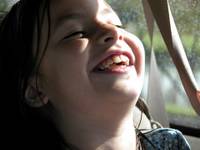 J - going looney - maybe all those crackuccinos finally caught up with her!

Last weekend we went to the Saltgrass Steakhouse at the Kemah Boardwalk to celebrate my sister's birthday. Her birthday isn’t really until July 23rd, but we’ll be living it up in Disney World that day, so we figured we’d hook up before hand. Sis had the brilliant idea that riding this thing would be fun. According to her, you get a little wet – like walking through the rain for a few minutes. Apparently, my cute little sister is a lying sack of crap! We got DRENCHED. It was like someone was standing over us, pounding us with 50 kajillion gallon buckets of stinky salt water. And it didn’t trickle cutely over us. It GUSHED. It was a good thing I didn’t wear a white t-shirt! We walked off of that boat as if they’d just rescued us from the middle of the ocean and didn’t have the common decency to offer us a towel. And, as if that weren’t FUN enough…we got caught in the STORM OF THE CENTURY. The sky opened up, and in 10 minutes, that place was covered in 5 inches of water! And it wouldn’t stop – until, of course, we finally reached our car. By that time, it was bright and sunny with not a cloud in the goddamned sky. J thought it was the “funnest day EVER!” She wants to do it all again next month when we stay here for our anniversary. 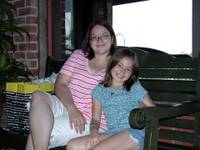 This was before we got DRENCHED! 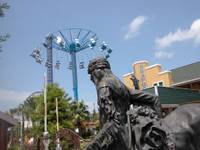 The ride we never got to ride!

Posted by Snarky Heifer at 11:24 AM No comments: Links to this post

In approximately 8 days, we'll be on the road again. Destination: Walt Disney World, Orlando, Florida! Doesn't it seem like just yesterday we were getting back from Colorado? The only problem I have with all these trips (and it's a GREAT problem to have) is that I can't keep up with my scrapbooking. Last night I finally finished our 2002 Road Trip to Colorado book. That's no type-o. 2002. I'm two years behind! And I haven't even touched the small events that have happened along the way - like birthdays and christmases and memorable holidays, etc. How do those OTHER moms keep up? Damn the super moms. Damn them to hell!

Now- about our trip. We've got plans! We've dissected books and watched videos and we know exactly what to expect and which parks we're going to. And which rides at each park we want to ride. And which shows at each park we don't want to miss. We even went to the Disney store in town to load up on cheap gear! This is the readiest we've ever been for a trip, I think! Yes, we're dorks.

The anticipation of this vacation makes all the regular daily crap I deal with before leaving seem so insignificant. Missed a deadline? Who cares! I'm going to Disney World! Article pictures suck smelly ass? Who gives a crap! I'm going to DISNEY WORLD! Have to sit through a long, boring conference call where normally it's all I could do not to pound my head in with a hammer? No problem! Surf the net - during the call - I'M GOING TO DISNEY WORLD! Dangit! Everyone else can eat my dust!

The only bad thing is that I have to go back work eventually. So, maybe I should make sure I leave a clean slate before I go to Disney World. Maybe. MAYBE NOT!
Posted by Snarky Heifer at 8:00 AM No comments: Links to this post