Well, the holidays are almost behind us....just gotta make it through New Year's Eve unscathed. Thanksgiving was mostly uneventful, unless you count the fact that I hosted it this year and we had 23 gazillion people sloshing around in our house. And we had two Christmas parties here since then. I'm all partied out. And I miss our housekeeper who's been on vacation for what seems like years...the dirt is piling up and there are remnants of Christmas morning buried deep in rugs and carpets. I honestly don't know how we managed to survive so many years without her weekly cleaning. We must have lived like goddamned pigs. One more week without her is going to force me to do the unthinkable...clean my own house. God forbid.

Celebrating Christmas with lil J was more fun this year than last. She seems to have a grasp of the whole concept now...singing carols and whatnot. And it's nice to have fresh blood in the house who still thinks Santa is watching her every move. J has been hip to us for awhile now...but lil J is still a sucker and we took full advantage of that shit in getting her to behave her damn self. It worked, most of the time. Except when we were at J's choir concert at school. Lil J didn't give a rat's ass if Santa was watching her by god...she was going to sing along with the choir and act a damn fool in front of a few hundred people if she damn well pleased. Some people thought it was cute...others were totally annoyed because they didn't drag their asses to school at 7:00 at night to watch some 2-year-old singing prodigy, they were there to watch their kids sing Silent Night in sign language for crissakes. Me...I was mortified. Needless to say, Hubber sat alone for the second half of the show and lil J and I excused ourselves (loudly, I might add) to the parking lot where more toddler singing and dancing took place. This child has way too much energy for me. 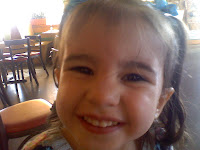 I haven't taken much time off work for the holidays...which is a damn good excuse for a shitty looking house. I've been working my tail off. And, I've actually been going TO the office since it's been quiet with all the people gone...I'm even getting shit done for a change. I've almost managed to clear all the clutter off my desk in anticipation for a clean slate for the new year. 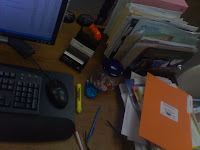