I Humped a Reindeer Today

In the spirit of the holiday season, I did my motherly duty and humped a reindeer today.  It's the least I could do to ensure my kids get some good loot this year.  We all know that their questionable behavior all year hasn't earned them any brownie points with the big guy... and now that we're poorer than ever, these gals need all the help they can get. So, Hubber and I dragged them 999 miles north to Santa's Workshop in North Pole, Colorado to sit on Santa's lap. 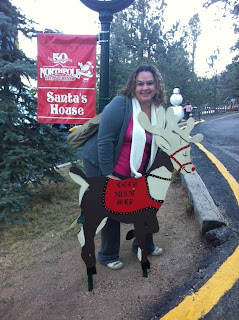 It was Hubber's idea that I suck it up and hump a reindeer or two to increase our chances of having Santa make extra stops to our home on Christmas Eve.  Unfortunately, the pic posted here is pre-hump.  The good humpity pic was "accidentally" deleted by some a-hole kid.  You'd think they'd be more grateful for my extra efforts to get them a bunch of useless shit for Christmas.  But, noooooo. I even went the extra mile and whispered sweet nothings into this guy's ear: 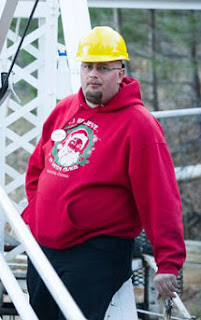 The soul patch, Santa-face hoodie and hard hat are all proof that he's some big wig up there at the North Pole.  So, I'm pretty sure I covered all the bases.

Turns out Santa doesn't give out cell phones to little kids.  Thank the 6 lb, 8 oz baby Geezus for that!  I woulda kicked his fat, jolly ass if he had agreed to that shit when the littlest Spawn started spewing out all the ridiculous crap she wants for Christmas.  She didn't give HIM a hard time about it, though.  She saved that shit for ME when Santa was out of ear-shot.

Spawn:  Well, it's official.  Santa doesn't buy cell phones.  I guess YOU'LL have to get me one after all.

Me: I'm willing to take that risk.

Spawn: Why do you HATE me so much?!  I'm the only kid in my entire class that doesn't have a phone!  It's not fair!

Spawn:  I can't even talk to you right now!

And, that's when she grabbed a sheet of paper out of the printer and stormed off.  Uh-oh.  Any time that little heifer snatches up a piece of paper, SOMEONE is gonna get a nasty note.  Here's what I got: 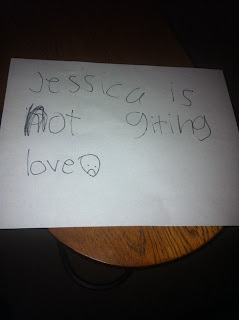