Spanx, Non-bras, and Other Shit I Refuse to Shop for with Spawn... 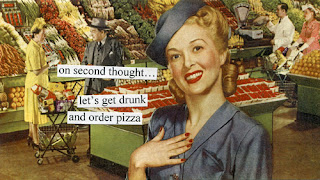 Before I had kids, I loved to go shopping.  Shop, shop, shop! I could shop till I dropped!  But, now, nearly 19 years into motherhood, I have learned to completely and thoroughly LOATHE shopping. Very rarely is shopping all about me...and when it is, I'm riddled with guilt because I'm buying MYSELF something when I could be spending money on spawns.

What the hell happened to me?!  I used to be a blissfully happy, self involved shopper!  Kids schmids! Even the first few years of motherhood weren't so bad. Although, I'm not exactly sure when the turning point...well... turned... I'm betting it was around the time the oldest spawn moved into the dreaded tween years.

That's also when I decided that I hate middle-schoolers. But that's a rant for another day.

The prospect of shopping now is accompanied with blistery hives, dry mouth, cold sweats, irritable bowels, and lots and lots of cursing. The cursing is especially pronounced while shopping with the oldest spawn who is now an "adult". Kinda.

During prom season, I had to add "all undergarments" to the freakishly long list of shit I refuse to shop for with her. I made this addition to the list in my head when we were sifting through Spanx and shit at Kohl's. She found it prudent to try on 538 vajillion different fucking styles of "body shapers" and "bras that aren't really bras, Mom!"

Oldest Spawn: (in fucking tears, ya'll!) This one makes me look soooo fat...!

Me: are you fucking kidding me right now!? You want to see FAT?  Huh?! Here, LOOK! This is FAT! (throwing up my shirt and grabbing handfulls of REAL fat)

Me: YOU stop it!  I just made up my mind. I'm not buying you any Spanx.  And no fucking "bra that isn't really a bra".  What the fuck does that even mean?!

Oldest Spawn: It's just the cup thingy, Mom!  With no straps! To lift my boobs!

Me: the stick-on things?

Oldest Spawn: I don't know how they stay on! I've never seen them but I know they exist!

Me: That's it. You're going commando from the waist up.

Then, we left the store, empty handed and utterly pissed off at each other. I already suffer from people-itis. So, putting me in a crowded store with the most majestic queen of drama is just asking for trouble.

And THAT, my friends, is when I added "all undergarments" to the list of shit I won't go with her to buy.


Basically, we now put money in her bank account and just send her on her way. She has ruined my zest for shopping forever.