Fears - The Legitimate and The Irrational

According to numerous scientific studies, the number one fear of most humans is public speaking. I have no source to site here, but I know I read it somewhere; in numerous, very well-renowned publications. And, while public speaking is not my favorite activity (it's not even in my list of top 100 things to do), it's not one of the things I fear the most.

The other day, after proclaiming that I'm one bad mother fucker who isn't afraid of shit, Hubber began ticking off on fingers and toes all the things I'm "afraid" of. His list was quite extensive, and mostly wrong and ridiculous, so I won't bore you with it here. But, after threatening to kick him in the penis if he didn't stop, I got to thinking.

I may look like a tough heifer... and I may act like a tough heifer, but deep down, I’m crazy scared! I live inside my head A LOT. What if this... what if that... until I work myself up into a frenzy and new fears rattle around in there taunting me. Now, are they all LEGITIMATE fears? I don’t know.  I guess it depends on your definition of LEGITIMATE.

So, to help me understand, I looked up the word LEGITIMATE and according to Merriam-Webster, the nerd of all words, it means:

And, because I thought all those definitions seemed pretty dull and boring, I decided to see what Urban Dictionary had to say.  Here’s what the word on the street is:

My fear of a home invasion

After a very disturbing experience as a young, single mother, I became increasingly afraid for the safety of my child.  In the early years, I locked, double-locked and triple-locked all doors and windows.  And when I couldn’t afford a security alarm, I set up booby-traps near possible entrances so that if I were sleeping and an intruder tried to creep in, he’d knock over a mountain of Legos and it’d wake me up.  I didn’t have a gun, so I kept a metal bat next to my bed so that I could go to town on that mofo when he got in!  I checked on the bat before bed every night. I did other things, too, but I’ll stop there before I get labeled with OCD.

After I got married, Hubber became my security system.  It wasn't something he was prepared for. But, y'all know Hubber... he's a real trooper! Of course he questioned my logic at first, but when I explained all the violent scenarios that run through my head in bloody detail, he backed off and let me go through my nightly motions of safe guarding the house before bed each night. It wasn't long before he started to help. He'd even stay up in order to be the last one asleep (he still does that, all these years later).

When you're a little nuts, you run the risk of rubbing off on people. And, so it was Hubber's fate that he "inherited" some of my crazy. Now, while we no longer set booby traps, we still have our nightly lock-up rituals…and instead of a metal bat next to MY side of the bed, Hubber keeps a freshly sharpened ninja sword next to his.  True story. 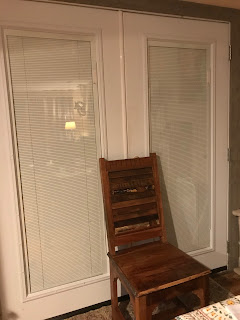 Back door isn't quite secure enough, so I put a heavy chair in front of it. If someone breaks in, it will wake us up. Bats and swords will come flying...so beware, home invaders!

My fear of wide-open and enclosed spaces/crowds (and sometimes just people in general):

I have high anxiety, y’all.  I’m not medicated for it anymore, but it rears its ugly head in dark, narrow stairwells, big, sweaty crowds, and also when I'm in a wide-open space with no crowd - but I start thinking, "what if a crowd forms around me? what if people start walking close to me and start breathing the air that was meant for me...and then I won't have any air to breathe... and what if I start to suffocate? What if a homicidal maniac is in this room? What if someone bars those closed doors from the outside like in the movie Carrie and I get trampled when people rush the doors to get out? What if I blink and suddenly people are huddled around me asking me for directions, or money, or to complete a 60-second survey related to my current cell phone carrier?!" What if!!

It's not fun inside my head, y'all. But, these are the things that create literal tunnel-vision and make my head dizzy, my knees weak, and my breath short. There is no rational explanation for said anxiety...and there is no method to the madness. It just happens randomly. That little brain trigger that sparks the crazy just decides to flip at the most inopportune times. One minute I'm perfectly fine in the long line for "It's a Small World" at Disney World. And then, BOOM. I gotta get the fuck outta there stat lest I explode into a million tiny pieces. Or worse, stab someone in the eye with the Mickey spork I squirreled away in my pocket for just an occasion (or for extra frozen soft-serve ice cream; either way, sporks always come in handy).

My fear of judgement and failure:

These two concepts, although seemingly unrelated, go hand-in-hand for me. Sure, most people worry about what people think of them... so they pile on the makeup, curl their hair, buy handbags they can't afford and high-heeled shoes that wreck their feet... but, those aren't the things I do to avoid judgement. I work harder to prove myself worthy. I go above and beyond to learn things that improve my standing with people. I learn to work efficiently, effectively with little direction because I want to be seen as competent; someone who can be trusted to "take the lead".

This is starting to sound like a resume pitch!

Seriously, though, I work hard because I work in a man's world where women are seen as inferior until they prove themselves capable (at least 348,000 times). And, even then, EVEN THEN, they aren't quite good enough. It's a tough world to live in when you're headstrong and stubborn like I am. I don't walk around oblivious and complacent. I want more. I strive for more. When I fear I'm being judged, instead of kicking it up a notch, I have a tendency to become lax, risking failure.

I also fear that I'm getting a little too old for this game. I fear I might become irrelevant.

P.S. My resume is ready to go.