Pinhead Left the Portal to Hell in Our Attic

When you rent a house and there's a lock on the outside of the attic door, your first instinct should be to leave that shit locked and never think about it or look at it or even acknowledge its existence in any way, shape or form. Period. The attic is automatically off limits. It does not exist if someone went to the trouble of adhering a freaking LOCK to it. No human being has any business going into that mofo. Ever. End of story. Especially if you're a part of my family; we are all magnets for pesky ghosts and other strange phenomenon.

We take hauntings very seriously, y'all. We don't fuck with ouija boards or any sort of witchery. We keep sage growing in the garden. And, we don't do it to spice up our poultry dishes...we do it in case we need to dry it, roll that shit up, and burn it to ward off evil spirits. Also, we have a death shrine (or "alter in memory of the loved ones we have lost" as Hubber likes to correct me because he thinks "death shrine" is morbid....UHM.... HELLO?! It's an alter for dead people! It don't get much more morbid than that!). The shrine exists so that my grandma's soul doesn't get all pissy when she looks down from Heaven and sees me doing nasty things in my bedroom or hear me using God's name in vain, which we know happens all the god-damned time. Because, hello, again?! I have children! And a husband! So, yeah. Lots of reasons to curse up in here.


Anyway, where was I? Oh, yes, LOCKED attic doors. Here's what ours looks like:

Whoever locked that shit up and didn't remove the lock when the tenants moved in was trying to tell people not to go up there lest they shalt die a painful, conjuring-style death of astronomical proportions. Message received, loud and clear yo.

So, imagine my bone chilling and hair raising fear when we started hearing noises in the fucking attic.

Me: Hubber. Did you fucking hear that?

Hubber: Huh? Uhm, no. I didn't hear shit. Just turn the volume up on the TV.

Me: That was definitely coming from the attic. It sounds like footsteps... and scratching... and other hounds-of-hell craziness!!! We have to move.

Hubber: You're nuts. It's probably just a family of possums...or squirrels...or birds, even. We like birds.

Me: Are you serious right now?! We do not like birds. In fact, we fucking hate birds. We have seen the movie! Alfred Hitchcock movies ain't no joke, man! Those evil, flying hell birds will peck your eyeballs out and suck at your brains until you shit your pants and die! You better board up the god-damned fireplace this very minute!

Hubber: It's nothing. Calm your tits.

Since that mofo was obviously in denial, I grabbed my holy candle (someone remind me to get that thing blessed one day), lit that bitch up, and walked around the house with it...willing all the bad juju out of the house. The noises stopped so it seemed to do the trick. But the silence was short-lived. A few days later, the A/C vent in the master bathroom started blowing out hot air.

HOT AIR, ya'll. Like air from HELL... or AFRICA. The kind of hot air that feels like a firey demon is breathing on you. My point is, it wasn't a natural kind of air to feel in your Houston, TX bathroom at night when your A/C is set at 68 degrees and every other vent in the god-damned house is blowing out cold air.

Hubber: Hmmm. Well, maybe some critter is up there and detached the A/C ductwork that goes to this vent and we're just feeling "attic air" and the cold air we should feel is actually just blowing around haphazardly in the attic.

Me: Who in the hell are you trying to convince here?! Because, that is the dumbest shit I've heard all day. And I went to work today, so you know I endured a LOT of dumb fucking shit.

Hubber: It's a logical explanation.

Me: No. The logical explanation is that the devil and his noisy, scratchy-ass spawn are camping out above our crapper.

Hubber had nothing else to say. He scrambled around for something long enough to close the vent...then he tapped it closed and said, "there." As if that was the end of that.

Then, a few days later, the noises commenced again. Scratching. Tapping. Walking. You can't hide from the devil, ya'll.

Me: I guess you're going to have to go up there and see if there are any "critters". I need the noises to stop. And, I need my cool air flow back in the bathroom. I can't breathe in there! Do you want me to suffocate and die?

Hubber: What? No. I ain't going up there to see a bunch of beady, little possum eyes staring back at me! They might have rabies!

Me: Then call the landlord!

Hubber: But, they'll want me to check up there first.

Hubber: Also, it's latched closed. I thought you didn't want to open the latch?

Hubber: If this motherfucking attic is haunted, I blame your sister! If anyone brought a ghost into this house, it's her and her witchy-ass ways! We should make HER check the fucking attic!

Me: Well, call her, then. I don't care who checks the attic...but this shit needs to get fixed! Especially if anyone wants sexy time ever again! And EVER is a long fucking time, man!

Hubber: I hate you.

He was definitely hatin'....but he finally resigned himself to checking things out up there. And guess what he found? Absolutely NOTHING, ya'll. The entire fucking attic is EMPTY. No critters...no sign of critters. No holes in the walls. No weird ductwork damage. Nothing.

Well, almost nothing. This was the only thing sitting up there in the attic all by its lonesome self: 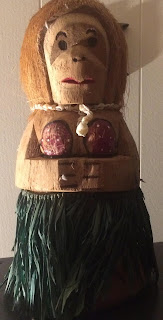 And, all I have to say is: what-the-fucking-fuck?

Is it some sort of spirit catcher? Pandora's box? Pinhead's portal to hell? What?!

And, what do we do with it? Burn in? Sprinkle holy water on it and see if it starts smoking? Dip it in Roger Rabbit Acme Acid? What?!

It's been a few days now and Torture Monkey has been sitting on a shelf in the living room so I can keep an eye on him.  So far, he's behaved himself. I think. And, yes, he is a HE. I'm not blind. I see the coconut bra, skirt, and lipstick. The mofo is in drag, y'all. It's his disguise. But, I'm not buying it.

If one day we all mysteriously disappear, you'll know he did it. I herby bequeath Torture Monkey to the Ed & Lorrain Warren occult museum.