Are "Escorts" Just "Prostitutes" in Disguise? 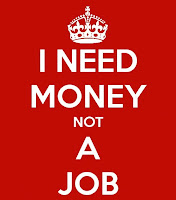 I've been busy, y'all.  Those who know me personally know that although I'm a struggling writer, I'm also a gainfully employed (on a part-time basis) heifer who collects a steady pay check in spite of her bitchy attitude and poor interpersonal skills (maybe that's why they've banned me from the office unless there's a staff meeting).  But, the gravy train is running on empty.  At the end of the year, after fifteen years, they're giving me the boot.  Right in the ass.

So, I've been spending the last couple of months trying to figure out what the fuck I can do to make the same amount of money without going back to work in an office full time.  Freelance writing doesn't pay shit, y'all.  (Just sayin'... in case it wasn't obvious.)  Aside from prostitution, diaper changing or serving as a drug mule, I'm pretty much open to anything.  Running an escort service would be awesome... but then I'd be a pimp and probably end up in jail.  I'm too damn cute for jail.

Anyway... I've been dabbling in some genius-ass stuff, y'all.  If it all works out, I'll fill you guys in on it.  Until then, we'll be munching on Ramen Noodles, Lone Star beer and generic peanut butter in a mobile home park that smells like piss.  Feel free to send us some charity.

My spawns get tired of me complaining about our lack of money.  The youngest spawn has even VOWED to never find herself in my pitiful situation when she's an adult....

Me:  That would be awesome.  You could even buy me a bunch of stuff.

Spawn: Billionaires have a hundred bazillion dollars.  They never run out of money.  That's the kind of husband I'm gonna need to get me all the stuff I want.  And, I won't ever have to tell MY kids that they can't have all the awesome stuff THEY want.

Me: Sounds like a plan!  But I would rather YOU were the rich one... go to college and become some great, fancy doctor or something.

I have raised that heifer well.  My work here is done.