I shoot the finger at asshole commuters

About three hours after posting my unemployment rant, I received a job offer. How’s that for good fucking karma?! The universe DOES love me after all. I don’t care what my horoscope says. Turns out, if you bitch and moan just enough, but not too excessively, the karma gods will look down on you with favor and bestow upon you great fortune.

But, don’t brag about that shit too much… because the universe hates a showoff. When you brag to other poor, unemployed losers too much about your sudden good fortune, you get flogged with experiences that will test your endurance for assholery.

And, I have a really short fuse. In case you didn’t know.

Turns out my new (old) job is only 17 miles from home… but with traffic and never-ending road construction, it takes at least 50 minutes to drive one way. FIFTY minutes. 5-0. You do the math. It's like I'm driving 25 hours a fucking day! Unless you are driving a 1983 Mini Winnebago uphill in high wind, it should NEVER take you more than 30 minutes to drive 17 miles anywhere.  Ever.

And, if re-joining the wonderful world of commuters at rush hour (which, let’s face it, is any fucking time of the day in Houston) wasn’t enough punishment, I also have to endure many, many, many asshole drivers. The worst of them is the one who follows two inches behind me. TWO inches. That’s the buffer between me and the asshole who thinks that riding my ass will move traffic along faster. I deal with at least three of these particular assholes daily.

“Look, Dick! We are all going no-fucking-where fast, yo! Kindly get off my ass and let me breathe! I’m already a loose cannon behind this fucking wheel. I don’t need you adding to my anxiety! Don't make me take out my gun!” That’s what I want to scream at them. But, because I don't really have a gun and because I fear road rage retaliation and think I’m still too young to die in a fiery car crash, I simply shoot the bird at them and smile...to be nice...so, they don't kill me.

Maybe I need this bumper sticker: 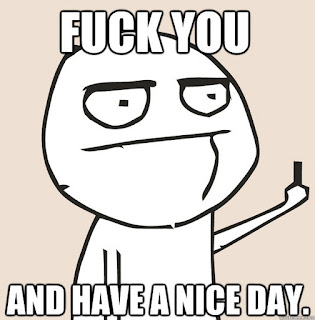 Posted by Snarky Heifer at 6:38 PM