We're More Like the Griswolds Than Cousin Eddie's Peeps

Although telecommuting isn't always all it's cracked up to be, the one constant positive thing about it is that I can work from anywhere.  And by "anywhere"... I mean ANY FUCKING WHERE!  Like here, for instance:

That's right, people! The Hancocks bought a second home...and this bad boy has wheels!  His name is Minnie Winnie.  Like a small weiner.  (But, we all know, size doesn't matter. Besides, Minnie Winnie has very ginormous balls.)

So, why did we take the plunge?  Well, Hubber had an itch.  I guess it's the caveman in him.  The last time he had this itch, I nearly died... and in order to live through his itch this time, we decided a motorhome was the way to go.

The first itch took place several years ago when Hubber introduced me to his kind of "roughing it."  It was loaded with nature, tents, sleeping bags, fires and more nature.  Momma don't like too much nature, y'all.  But, I'll try anything once... so I was a good sport about my first camping trip.  Mother nature, however, wasn't too keen on my dabbling with her affairs.  First, it was hot and muggy and mosquitos were everywhere.  Next, it was so cold I thought my nips would break right off the ends of my boobs.  Then, it rained.  All night. As I lay in my tent. Dying.  I kid you not.  And, to make matters worse, in the middle of the worst rain storm in history, my toddler decides to contract explosive diarreah.  Climbing (but mostly slipping and sliding) a half mile uphill in the dark of night to find the restroom nearly killed us both.  It's a miracle that I lived to tell the tale.

So, when Hubber got the "we really need to go camping" itch again... the solution was either DIVORCE or buy a motorhome.  We figured a divorce would be too taxing on the children so we opted for the latter.

Which makes the entire family happy.  The "real campers" can pitch a tent if they want to, but Momma's gonna be warm and cozy inside her Minnie Winnie; banging away on the laptop, sipping coffee and watching trash on television.  And, when the explosive diarreah stikes (and it WILL strike), the toilet will only be 6 feet away!

Although I sure hope that when the shitter gets full, Hubber doesn't turn into this guy: 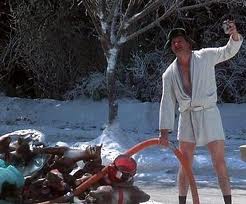