So, let's see....where to start....where to start...?  I'm thinking the "excessive booze" doesn't really need explanation.  Because, really, y'all?  It's what I do.  I mean, I show up at my sister-in-law's house in Colorado, and what's there waiting for me?  Two bottles of vodka...HAPPY BIRTHDAY TO ME!! 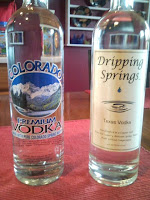 Then, I put on my STFU shirt and pop into a bar on St. Patty's day and what do I get? Green beer. 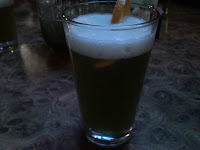 Nice, huh?  Sometimes I wonder if I should be offended because everyone sees me as a skanky lush....but then, I think again....and I say, bring on the booze peeps!
But seriously, let's get down to biddness.  Turns out our house is haunted.  And, I blame my sister, because before she moved in, there were no ghosts here. But now, all kinds of crazy shit has happened.  We hear the shutters opening and closing....the attic fan vent opening and closing...knocks on the wall... and most recently, locked doors opening.  Yeah.  So, get this.  My obsessive, compulsive sister who checks 6 times to make sure doors are closed tightly and locked was the last person to leave the house one day.  And, we all rest easy knowing that she's the last one out the door because that means we can rest assured that all the doors are closed and locked...all the faucets are turned off...all the chi irons are unplugged...etc.  So, when J was the first to get home that particular afternoon, and the back door in the garage (leading into the house) was slightly ajar, she knew something was up.  Someone or SOMETHING had opened that door.

Of course, we reacted like sane people and resisted the urge to call Ghost Hunters and called the cops, instead.   They searched the house and found no one there and nothing missing.  Which made me regret not calling Ghost Hunters afterall.  Mofo. The police search DID, however, make me aware of how ridiculously filthy my house was.  J had panties on the floor (what else is new)... Lil J had so many toys strewn about her room that the floor was nowhere to be seen and dog hair was an inch thick on the house floors that were actually visible....and let us not forget what "toy" was accidentally left on the master bathroom counter. Because, evidently, no one thinks it's their job to wash the damn thing and put it away! Do not get me started.
Enough about that.  So, the road trip we took was to Colorado to visit Hubber's peeps....who were great and showed us a fabulous time.  On the way back, we hung out in Amarillo to see Cadillac Ranch and to visit Palo Duro Canyon...both were awesome, by the way. 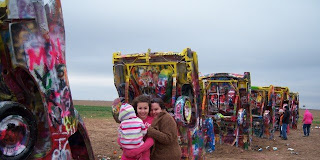 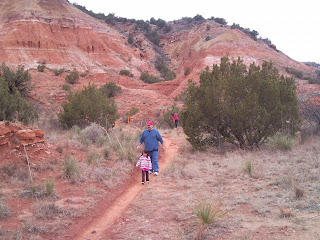 When Spring Break was over, it was back to work as usual.   Which meant a bbq cook-off that took place over the course of 3 days and consisted of an attendance of over 5,000 people...half of whom were drunk off their asses one night....then the planning of upcoming golf tournaments, a motorcycle/auto rally and a new subscription service newsletter.  Yippee.  Shit just never seems to slow down around here. It is nice to be able to stop and smell the roses once in a while, though, and that's what our road trip was to me.  I wish I could take a permanent road trip.
at April 02, 2010