Hubber has been out of town for what seems like years and I can't seem to find the inspiration I need to write.  The realization that Hubber's new, long and tangled beard might somehow be my muse is a little unnerving.  For starters, I don't want the head on Hubber's shoulders to get any more inflated than it already is... also, I didn't think I was one of THOSE writers who needed inspiration from a real, live, breathing PERSON (or the fantastic beard attached to said person).  I thought I was inspired by aquatic turtles that hate water or trash cans full of stinky pull-ups and empty beer cans or Ancient Aliens on the History Channel.  Or, maybe even this guy: 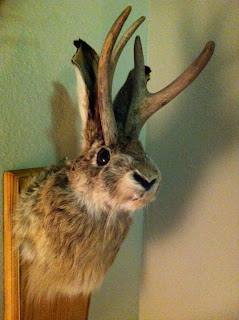 Meet Hugh Jack-a-man, the newest member of the Hancock household.  In life, he was a fierce, strikingly handsome, big-balled jackalope whose mystical powers were second only to rainbows pooped from unicorn asses.  In death, his head hangs proudly on the wall above my desk where he can look down on me while I write and shower me with inspiration.  But, as much as I love him, Hugh hasn't done shit for my ju-ju yet.

So, now that Hubber and his long beard are gone and Hugh continues to stare dumbly into nothingness, and I can't booze it up every night like I'd like to, my writing has really suffered.

...Which leads me to a very important question.  Why don't bottles of vodka include nutrition information?  I need calorie counts and sugar content information, mother fuckers!  Fat girls on diets need booze, too!  I could be putting some of that shit in my diet 7-up if I knew it was low on sugars.  But NOOOOO!  It's like the entire alcohol industry is out to get me.  It's a conspiracy.  I bet Al Gore is behind this shit.

Either Hubber needs to mail me some beard hairs or Hugh needs to quit being a little bitch and start
beaming with smart and witty inspiration.  Maybe I need to buy him a bow tie.  THAT might make his smarter. It works for Sheldon Cooper.