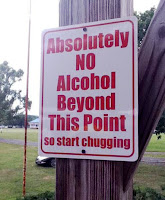 Patsy:  How are you doing without the booze?

Me:  Do you think I'm an alcoholic?  Because I most certainly am not.  If anyone MIGHT be an alchy it's Hubber.  That mofo drinks beer every day!  I only have a swig or two of vodka a few times a week.

Hubber: Hey, now.  I only drink beer daily because you make me!

Patsy:  She MAKES you?

Hubber: Yeah. She's collecting beer bottle caps. She told me I needed to drink at least a six-pack a day in order for her to have enough bottle caps to finish some stupid table thing she's crafting.  She did calculations and mapped it all out!

Me: Oh, yeah.  I forgot about that. I'm not really going to make a crafted, mosaic bottle-capped table.  I just like him when he gets tipsy and dances around the house in him skibbies while the dog howls.  It's quite entertaining.  And, seeing how we're broke all the time, I have to get my entertainment any way I can!

Which reminds me of the very first time I had to swear off of the booze.  That time, though, Pasty wasn't there to force me. I did it on my own.

I was 17-years-old and had just broken up with my boyfriend.  And by "broken up with", I mean "dumped by".  Back then I got dumped a lot.  I'm sure they did it because they were intimidated by my intelligence and beauty.  They figured I'd be famous some day and I'd end up breaking their hearts when I ran away with Johnny Depp... so they beat me to the punch and dumped my ass early on.  Back in those days I was a real drama queen (boy, how times have changed).  Usually, REVENGE was my cure for the blues.  What better way to avenge my broken heart than by crashing a house party with a bottle of tequila in one hand and a hot dude (who drove a Camero) in the other?

Turned out, the joke was on me that night.  The last thing I remember clearly is seeing my ex with some big-boobied floozie and deciding I'd spend the rest of the night taking tequila shots and swapping spit with the Camero Boy. After that, the night is a complete blur.  At one point, my legs gave out on me and I fell on my knees and I blanked out.  When I came to, I was in a strange bed, wearing a Depeche Mode concert shirt that was too tight and Camero Boy was cleaning someone's vomit up off the floor.  I picked up the phone near the bed and called one of my girlfriends to tell her that someone at the party had stolen my shirt.  Then, I blanked out again.  I woke up the next morning in my own bed with bloody knees wearing nothing but my panties.

That was when I swore off tequila.  I was married with children the next time I ever drank nearly that much alcohol in one sitting....but I'll save that story for another time.  Suffice it to say that it also involved vomit and nudity.   And not in a good way (unless you're Hubber).

My point here (if there really is one) is the fact that I can't have booze right now isn't necessarily a bad thing.  I'm probably performing a public service.

But, y'all better watch out!  When I get to hit the bottle again, I'm gonna hog wild!