The natives started getting restless on Day 5, so we drove them up to the mountains in search of snow.  The entire state of Colorado has been blaming Texans for bringing record high temps with them from Texas on Spring Break.  We were bound and determined to prove to those bastages that it wasn’t our fault by finding a patch of snow and playing in that shit.


Sledding on a two-foot patch of slush wasn’t as fun as it promised to be swimming around in my head.  Also, it was mostly yellow and I vaguely remember my mother warning me about yellow snow.  Instead of taking chances with our health, we stopped for lunch.


Now, we’re on our way home.  We’re going a different route this time… We just survived the Raton Pass between Colorado and New Mexico.  The Winnie took it like a champ uphill at 35 mph (on a 75 mph speed limit).  I’ll never ever curse large, slow moving vehicles again.  From now on, I’ll just politely go around those bitches and flash the peace sign at ‘em.  And, maybe a boob (if they’re lucky and I’m feeling frisky).


Touristy shit we did while out and about: 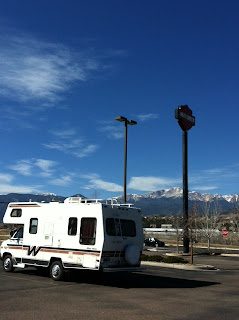 Touristy shit we have planned for later today if we make it to Amarillo before dark: