How NOT Drinking Alcohol Can Kill a Mofo 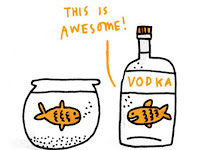 Much to Patsy's dismay, I recently fell off the wagon.  Well, it wasn't really to her dismay in that I never actually TOLD her I started boozing it up again.  But, if she DID know, that heifer would be dismayed for sure.  Know what I say to that?  Fuck it.  Fuck Patsy and her skinny ass self.  I did my research, bitch!  A single shot of straight vodka only contains 100 calories... and ZERO sugars.  That's right.  NO SUGAR.  And, according to Lance Armstrong's peeps, wine has even fewer calories.  At first I was like, "should I trust Lance's peeps?  Lance is a crack whore... maybe I should do some fact checking"... so I dug a little deeper and found some amazing news from the Calorie King. Only 96 calories in 80 proof vodka!  If the fucking king of calories says it, it must be so!

Also, 96 upside down is 69.  My lucky number! And... I made it six weeks without consuming alcohol. That's gotta be some kind of world record or something.  Where's my fucking prize?

During this time, I learned a very important fact: Being sober for long periods of time will give you homicidal tendencies.  No joke, people.  Why do you think sober people are so fucking loony?  It's because they are fighting hard, every second of their lives, not to kill a mother fucker.  When you consume adult beverages (in moderation, of course), you enjoy that "I don't really give a fuck" attitude.  Which is nice when you're like me, genetically prone to craziness.

My excessive sobriety almost made me kill:


...and that's just to name a few.  So the fact that I'm officially off the bandwagon pretty much means that I bought a one-way ticket to heaven.  I'm like Mother Teresa - except way hotter.
Posted by Snarky Heifer at 11:14 AM

Email ThisBlogThis!Share to TwitterShare to FacebookShare to Pinterest
Labels: adult beverages, advice, alcoholics, i don't give a shit, i hate my neighbors, i like big butts and i cannot lie, i'm alive, mommy juice, psychiatric help, shit that drives me batshit crazy