This is how you piss people off at the grocery store.... 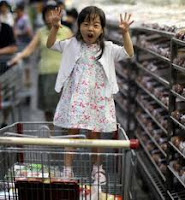 1. Hog the entire aisle.  Park your cart on the left and stand in front of oncoming traffic and act like you can't find whatever it is you're looking for.  Also, act like you don't see anyone trying to get around you.  If they really wanted to get by, they'd say, "Excuse me."  Right? Right.

2. Put a bunch of crap in your cart and stroll around putting it all in places it doesn't belong.  Put some bacon near the canned goods.... frozen broccoli near a loaf of bread... toilet paper near the prune juice.  Wait. That last one kinda makes sense.

3. Bring the loudest, most annoying toddler with you to the store and either: a.) let them run around knocking crap over and leaving kid snot all over the non-perishables; or b.) strap them into the the cart seat and ignore them while they scream at the top of their lungs and pester the living shit out of everyone around you.

4. Whip out the coupons when you go to check out.  And when I say coupons, I mean STACKS of those badboys!  Everyone loves a good deal... sure, it'll piss the guy in back of you off, but when you save money at the grocery store, you have more cash for booze and whatnot... so screw it and get to clippin'!

5. Pay with a check.  Who the heck still writes checks these days?  You. That's who. And, you write slooooow.  Make sure to take some time rummaging in your handbag for a pen... and screw up and void at least one check before starting over...that will really set the next guy in line off!
Email Post